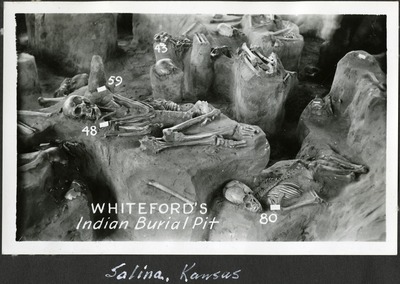 A black and white real photo postcard of the Whiteford Indian Burial Pit. This photo shows several skeletons and other bones that were a part of a Indian burial site. Located near Salina, Kansas, the Whiteford family excavated the site which was made into a tourist attraction that lasted from the mid-1930's through the late 1980's. The Indian Burial Pit was declared a National Historic Landmark in 1964. The State of Kansas purchased the site in 1989, and in 1990 the pit was filled with clean sand and covered with concrete after the Pawnee Indians held a funeral in which they covered the remains with blankets and shawls. The area was re-vegetated with grass and surrounded by a fence.