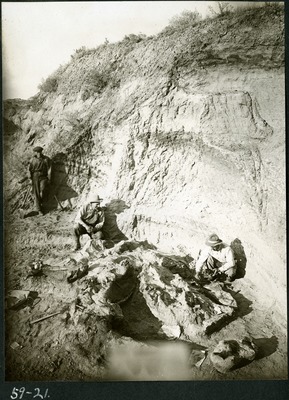 This black and white photograph features three men working on a fossil excavation. One man is crouched among the fossils, holding a cup and brush. He is wearing a shirt, trousers, and a dark, wide-brimmed hat. He is brushing off exposed rib bones. Another man, wearing overalls, laced boots, and a light-colored, wide-brimmed hat is to his left, also crouching down, and smiling at the man working with the brush and cup. The man at the far left of the photograph is wearing overalls and a dark, short-brimmed hat and is leaning against a sheer outcrop; he is holding a shovel and a pickaxe. A bit of sagebrush lines the top of the outcropping, though most of the brush is dry or dying. The bottom center of the photograph is poorly exposed, resulting in a blurry segment. Pieces of newspaper are scattered around the dig site held down by fist-sized rocks. A backpack, a small pickaxe, a hand pick, and a brush head are lying in the dirt at the bottom left of the photograph. Numbers are written below the photograph.