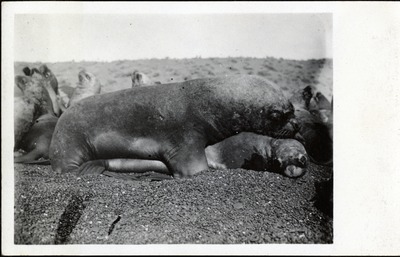 In the image captured, we see a central focus on a mother sea lion lying on top of her pup. In the background we see the heads of other herd members. The two pinnipeds rest on the beach as the rest of the herd basks on the dark pebbled beach. The two rest on the smooth rocky black gravel that covers the beach. The outer ridges of the cove take up the entirety of the background. In this photograph, the mother penniped and her young calf are both resting on the sands of the beach. Other names for these sea lions include the following: Octararia flavescens, Octaria byronia, South American Sea Lion, Southern Sea Lion, and Patagonian Sea Lion.