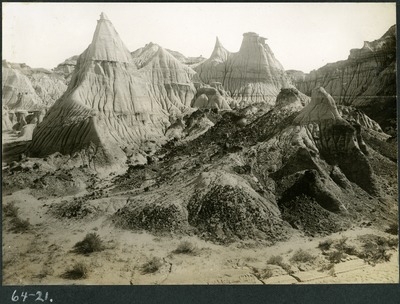 This black and white photograph features a jagged landscape. Multiple peaked outcrops occupy both the foreground and background. The photograph was taken from within the outcrops and peaks. The peaks contain uniform horizontal sedimentary deposits, and have many small, rain-washed rills on their steep slopes. The outcrops are clearly stratified. The outcrops and slopes themselves are mostly barren and covered in loose rock. The photograph only depicts a few sagebrush bushes and patches of dried grass that line a dry creek bed at the base of the photograph. The dry creek bed contains evidence of ripples and old rills. Numbers are written below the photograph.