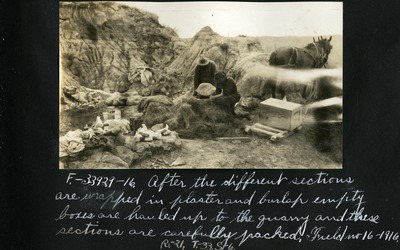 A black and white photo of a specimen being packed into a box for transport. Two men are in the quarry where the fossils specimens were excavated and they are preparing a box to hold the specimen that is sitting on top of the box. One of the men has his right arm in the box while his left arm rests on a side. The other man is standing behind the box with the specimen directly in front of him. Two horses stand to the right; one of them is hitched to a small pallet that will be used to transport the box down the trail. Tools, tarps and other supplies are seen to the left of the men. There is some damage on the photo that shows what looks like fog or clouds in the right center of the photo.