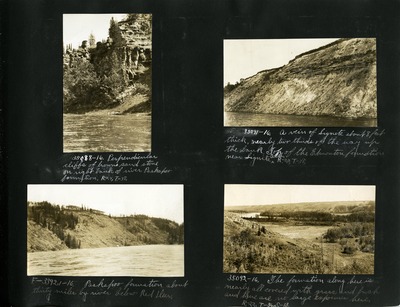 This page is from George Sternberg's personal photo album. Four pictures are placed on a black background. Each of the photos presents a black-and-white image of landscapes and geological formations. The top-left photo features brown sandstone cliffs along a river in the Paskapoo formation. The top-right photo depicts a rock cliff along a river in the Edmonton Formation. The bottom-left photo is a second picture of the Paskapoo Formation along a river near Red Deer, Alberta. The bottom-right photo is a rock formation covered in vegetation with a river running in front of cliffs in the background. Below each photo, George Sternberg has written an inscription.