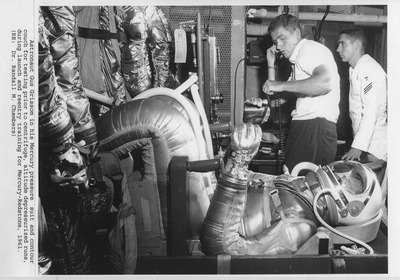 This black and white photograph features astronaut Gus Grissom in his pressure suit on the contoured couch during an altitude depressurized text. Two men are behind him. One is in uniform, and the other one is in a suit and holding a phone. Printed text is on the left side of the photograph.

Astronaut Gus Grissom in his Mercury pressure suit and contour couch for testing prior to centrifuge, altitude depressurized runs, during launch and reentry training for Mercury-Redstone, 1961. (RE: Dr. Randall M. Chambers)