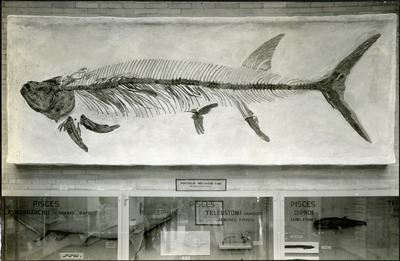 A black and white photo of a display of a Portheus Molossus Cope and other fish specimens in the Peabody Museum of Natural History at Yale University. The other specimens in the display include a Pisces Elasmobranchii shark, a Teleostomi Ganoidei (armored fish) and a Pisces Dipnoi (lung fish). According to an article titled "Molossus Cope" by Malcolm Rutherford Thorpe from the August 1934 issue of American Journal of Science, this Portheus Molossus Cope was discovered in 1932. Alfred E. Stude, a faculty member of the Wichita County (Kansas) Community High School was given credit for the find. The specimen was discovered on the Berry homestead in Logan County, Kansas, about 18 miles southwest of Russell Springs. George Sternberg sold the specimen to Yale University where it was put on display at the Great Hall of the Peabody Museum of Natural History after it was prepared and mounted by Mr. Fred Darby and Mr. H. S. Thompson.