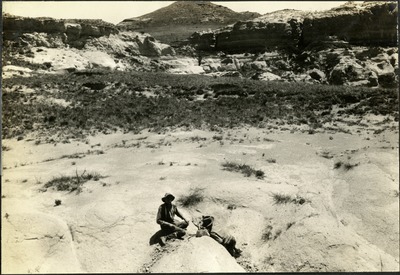 A black and white photo of two men working on collecting fossils they have found in an unknown location. The men are at the bottom of the picture in a rocky area. One of the men is sitting and looking at the camera. The other man is squatting and has his back to the camera. There is a bag on the ground behind the men and either a rock or a fossil is on top of a large rock that is in front of the men. The rocky ground leads to a grassy area in the middle of the photo and rock formations and hills are seen in the background.