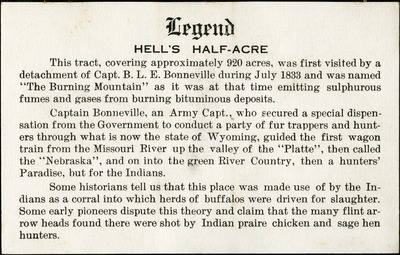 This black and white card features a brief history of Hell's Half Acre. Typed text fills the card.

Legend Hell's Half-Acre This tract, covering approximately 920 acres, was first visited by a detachment of Capt. B.L.E Bonneville during July 1833 and was named "The Burning Mountain" as it was at that time emitting sulphurous fumes and gases from burning bituminous deposits. Captain Bonneville, an Army Capt. who secured a special dispensation from the Government to conduct a party of fur trappers and hunters through what is now the state of Wyoming, guided the first wagon train from the Missouri River up the valley of the "Platte", then called the "Nebraska", and on into the green River Country, then a hunters' Paradise, but for the Indians. Some historians tell us that this place was made use of by the Indians as a corral into which herds of buffalos were driven for slaughter. Some early pioneers dispute this theory and claim that the many flint arrow heads found there were shot by Indian praire(sic) chicken and sage hen hunters.