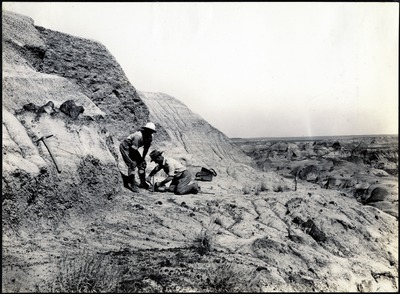 This black and white photograph features two men excavating. They are on a rock outcrop, which starts at the top of the photograph and slopes down. A series of breaks stretch to a thin strip of plain at the horizon. John Abbott is kneeling on the ground in front of a spike driven into the ground. He is scooping dirt into a bucket with a shovel. The man is wearing a long-sleeved shirt, pants, work boots, and a hat. Behind this man sits a dark satchel. The man next to his left is leaning against the outcrop with his hands on his knees. He is wearing a similar outfit, but his hat is a pith helmet, and his boots are tall with bootlaces. His face cannot be seen. In the left foreground of the photo a pickaxe lies against the outcrop a few feet off the ground.