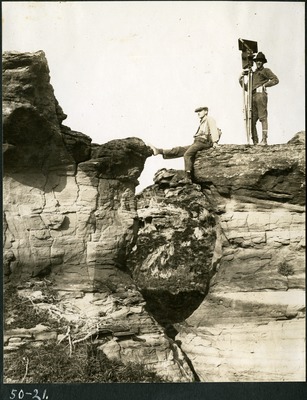 This black and white photograph features a man standing on a large rock formation, hand on his hip while holding a camera and tripod. He wears a button-up collared shirt, tight pants, and lace-up boots. A second man sits with one leg extended between a gap in the stratified rock formations; he rests one foot on the near side of the leftmost section of the formation. This man is wearing loose-legged pants with tied boots, suspenders, and a loose linen shirt. He is also wearing a flat cap. The rightmost formation displays various strata patterns within the rock and pressure splitting on the uppermost layer of the rock face. The leftmost formation features less strata layering and more pressure splitting. The rock face on which the second man rests his foot is elevated from the rest of the formation. The gap in the rock formations shows a third rock structure behind the two men. Roots cover the lower leftmost part of the rock formation; low brush covers sections of the roots. Numbers are written below the photograph.