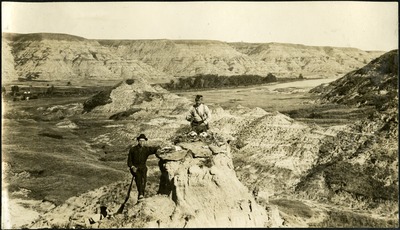 A black and white photo of two men standing next to a hawk's nest on top of a spire of a rock formation. One of the men is standing to the left of the rock with his arm resting on the rock, and his other hand is holding a rifle. A dead hawk is on the rock next to the man. The man is wearing a hat, a black shirt, vest and pants. The second man is standing behind the rock next to the nest that contains two baby hawks. He is holding his hat in his hand. A river is seen in the background with outcroppings on the other side. Trees line the river bank. Smaller outcroppings are behind the men.