071-03: Collecting a Specimen on North Slope with Teammate 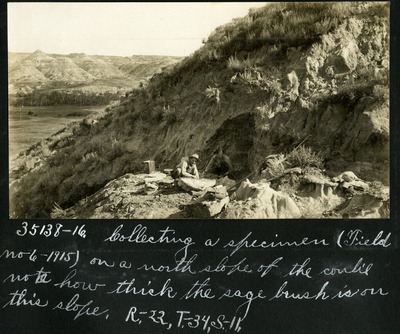 Collecting a Specimen on North Slope with Teammate. In this black-and-white photo, two men are excavating a fossil on a ledge of an outcrop. Both are squatting near the fossil. The man with a light, narrow-brimmed hat is smiling and looking at the camera. The second man who wears a dark fedora, lowers his head, concentrating on brushing away debris with a small whisk broom. To the left is a tall square bucket and a burlap bag. Between the men lies a pickax. In front of the men on the ground is a knapsack. Handles of other tools are visible. On the right side of the ledge is a folded tarp and cloth bundle of some kind. The ledge and the slope of the outcrop take up most of the photo. They are covered with rocks and sage bush. In the upper left corner of the photo are outcrops in the distance. At the base of these outcrops is a tree line of deciduous trees.