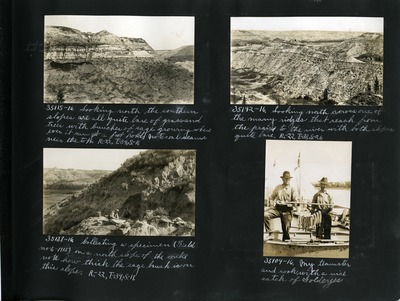 This page is from George Sternberg's personal photo album. Four of the black-and-white photos that were taken by George Sternberg in 1916 appear on page 71 in his album. Three of the photos are horizontal and the fourth one is vertical. Under each photo, Sternberg provides handwritten descriptions to provide more details of each photo. The handwritten inscriptions start with numbers and end with numbers for the first three photos. Three of the photos have natural scenery, including outcrops, sage bush, trees, and grass. In the third photo, two people collect samples on a slope of the coulee. The last one shows two of Sternberg's crewmen standing in a small boat, holding a stringer of goldeye fish that they caught from the river.