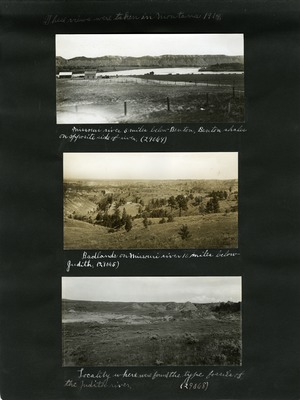 This page is from George Sternberg's personal photo album. These black-and-white photos were collected by paleontologist George Sternberg. Above the photos is an inscription written by Sternberg that says, These views were taken in Montana, 1914.â€ The top image is a photo of the Missouri River and the Benton Shales that can be seen behind it. Also in the photo is a fenced in pasture and two small buildings. The second photo shows the badlands that surround the Missouri River. Plenty of grass and trees are visible in this photo. The third photo shows a chalk area near the Judith River where Sternberg found some fossils. Underneath each of these photos is an inscription written by Sternberg.