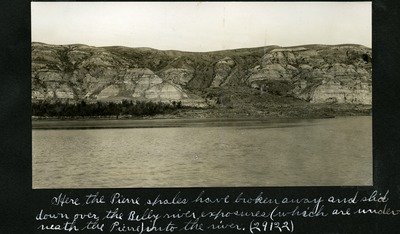 A black-and-white photo of the Red Deer River. The foreground of this photo is the Red Deer River which is located in Alberta, Canada. Above the river is the Pierre Shale, which is a geological formation that was named after its exposures that were studied near old Fort Pierre, South Dakota. Shale is a sedimentary rock and is often found with sandstone or limestone.

Here the Pierre shales have broken away and slid down over the Belly river exposures (which are underneath the Pierre) into the river. (29122).