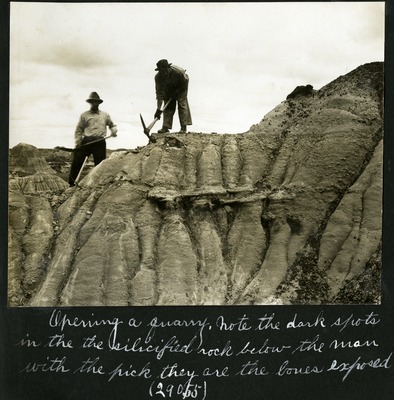 A black and white photo of two men opening a quarry to excavate bones from the rock. Two men are on top of a rock formation using pick axes to open a quarry. One man is standing and is holding a shovel; a pick axe is in the rock next to his feet. Another man is using his pick axe to break into the rock. Bones are seen in the silicified rock below the men. The bones were identified as a discovery of George's Chasmosaurus (ceratops) between pages 94-95 of the book written by Charles H. Sternberg - "Hunting Dinosaurs in the Bad Lands of the Red Deer River in Alberta, Canada."

Opening a quarry. Note the dark spots in the silicified rocks below the man with the pick they are the bones exposed (29055)