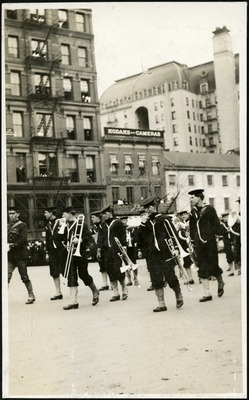 Marching Band in Funeral Procession. A black and white photo of a marching band in a funeral procession for victims of the USS Maine. The men are carrying various instruments, including trombones and tubas. Several buildings are seen behind them, and people are in the windows of those buildings. The USS Maine exploded off the coast of Cuba in 1898, but it wasn't until 1911-1912 that the bodies were removed from the sea and brought home to the United States. The funeral procession took place in Washington D.C. where the men were buried in Arlington Cemetery.