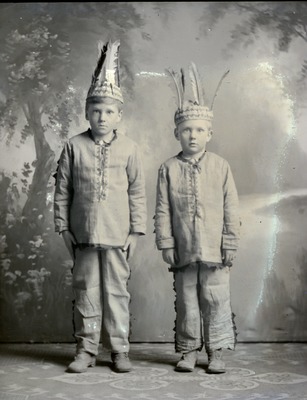 Toland children - Harry, left, and Buford are standing next to each other and are wearing Indian costumes Toland, Harry Mrs. / The 1920 Federal Census lists Harry Andrew Toland, 29, a farmer living in Ohio Township with his wife, Polly Ann, 31. Also living with them were their two oldest sons, Harry Athol and Buford A. (shown in this 1916 photo at the ages of 7 and 5) as well as another son, Cloise, 4, and a daughter, Verla, age 1. Harry Athol (LEFT) graduated from St. John High School in 1925, married Allene Pleasant and moved to Pratt. He is not listed as a survivor in his mother's 1962 obituary. Buford A. (RIGHT) married Delcie Nimmo of Pratt in 1939 and went on to become a pumper for City Service in Great Bend. He was a member of the Cheyenne Sportsman Club. He died Nov. 28, 1999 and is buried at Fairview Park Cemetery, St. John, Kansas, beside his wife who died in 1993. They had no children.

For questions contact the Stafford County Historical and Genealogical Society.