048 Back Side of Photograph Liftoff for Mercury Redstone 2 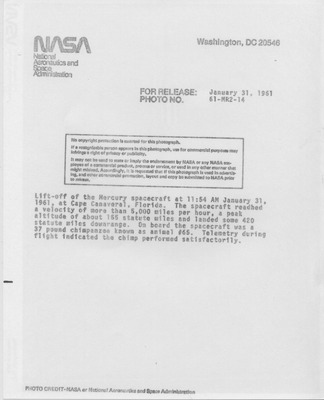 National Aeronautics and Space Administration Washington, D.C. 20546 For Release: January 31, 1961 Photo No. 61-MR2-14 This photograph is a government publication - not subject to copyright. It may not be used to state or imply the endorsement by NASA or by any NASA employee of a commercial product, process, or service, or used in any other manner that might mislead. Accordingly, it is requested that if this photograph is used in advertising, posters, books, etc. Layout and copy be submitted to NASA prior to release. Lift-off of the Mercury spacecraft at 11:54 AM January 31, 1961, at Cape Canaveral, Florida. The spacecraft reached a velocity of more than 5,000 miles per hour, a peak altitude of about 155 statute miles and landed some 420 statute miles downrange. On board the spacecraft was a 37 pound chimpanzee known as animal #65. Telemetry during flight indicated the chimp performed satisfactorily. Photo Credit - NASA or National Aeronautics and Space Administration