340 Back Side of Photograph Liftoff for MR-4 Rocket 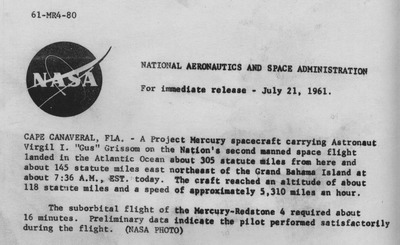 61-MR4-80 National Aeronautics and Space Administration For Immediate Release July 21, 1961 CAPE CANAVERAL, FLA. - A Project Mercury spacecraft carrying Astronaut Virgil I. "Gus" Grissom on the nation's second manned space flight landed in the Atlantic Ocean about 305 statue miles from here and about 145 statute miles east northeast of the Grand Bahama Island at about 7:36 A.M., EST. today. The craft reached an altitude of about 118 statute miles and a speed of approximately 5,310 miles an hour. The suborbital flight of the Mercury-Redstone 4 required about 16 minutes. Preliminary data indicate the pilot performed satisfactorily during the flight. (NASA Photo)