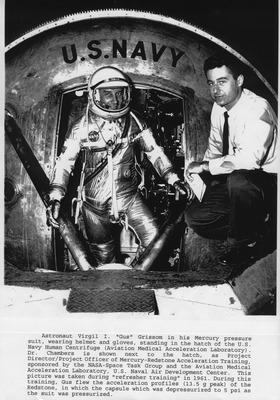 This black and white photograph features astronaut Gus Grissom in his pressure suit standing at the hatch of a centrifuge. Dr. Randall Chambers kneels next to him in a suit. Printed text is below the photograph.

Astronaut Virgil I. "Gus" Grissom in his Mercury Pressure suit, wearing helmet and gloves, standing in the hatch of the U.S. Navy Human Centrifuge (Aviation Medical Acceleration Laboratory). Dr. Chambers is shown next to the hatch, as Project Director/ Project Officer of mercury-Redstone Acceleration Training, sponsored by the NASA-Space Task Group and the Aviation Medical Acceleration Laboratory, U.S. Naval Air Development Center. This picture was taken during "refresher training" in 1961. During this training, Gus flew the acceleration profile (13.5 g peak) of the Redstone, in which the capsule which was depressurized to 5 psi as the suit was pressurized.