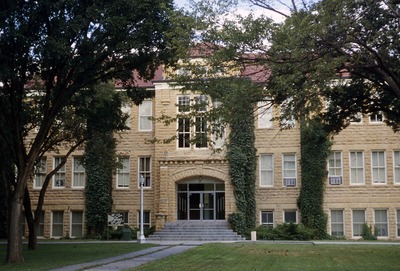 The old Rarick Hall as shown in August 1959. Built in 1912 as the Model Agricultural High School, it was later known as the Industrial Building. It became known as Rarick Hall, in honor of President Clarence Rarick, after it was remodeled in 1953-1954 to become the home for the education and psychology departments. The building was demolished in 1978; a new Rarick Hall was built on the same site and opened in 1981.