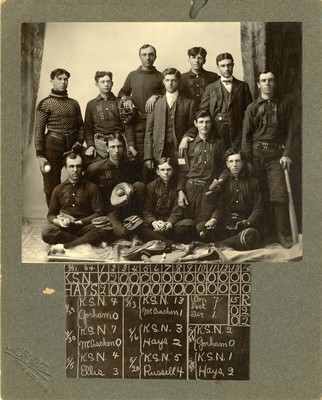 The 1904 Western Branch of the Kansas Normal School Baseball Team Photograph and Scoreboard. A black and white photograph shows twelve members of the 1904 Western Branch of the Kansas Normal School posing for a team photograph. There are four men in the front row sitting in the front row with their legs crossed and one man kneeling. The men in the front row wear black uniforms with the initials "W.B.K.S.N.S." written across the front of the shirt. Three of the men in the back row wear the same uniform. The photograph is taken in front of a wall with drapes on either side. There are seven men in the back row standing. There is a scoreboard on the bottom of the photograph that shows the scores for games played during the 1904 season and how many games were won, lost, or ended in ties.