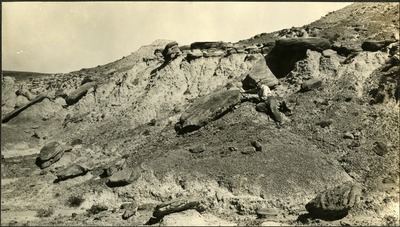 This black and white photograph features a rock outcrop in Montana. Erosion has caused ridges and rills in the rock. George Sternberg is in the center laying on the ground. He is wearing a rolled long sleeve shirt, a pair of pants and boots and a hat. He has his hand placed on a large rock.