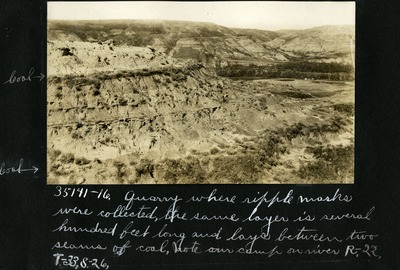 A black-and-white photograph of a view of the outcrop where the ripple marks were found. In the photo you can see where the outcrop has eroded over time and created step-like layers. The outcrop is large, and Sternberg has pointed out on the left side of the photograph where two beds of coal can be found in the layers. A man can be found in the center of the page. This man is digging around a fossil, preparing it to be removed and taken from the outcrop. In the distance, on the right side of the photo, you can see where Sternberg has set up his camp near the river. The white tents are a stark contrast to the row of trees behind them. Sternberg notes two different places where the layers of coal are seen.