009-01: Collecting the Skeleton of Gryposaurus Notabilis 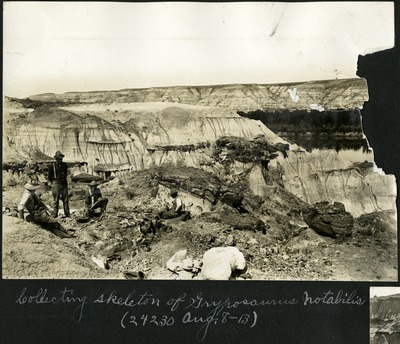 A black and white photo of four men in an area where a fossil skeleton of a Gryposaurus Notabilis was found. A canyon with a river flowing through it is in the background. A row of trees are seen on the far side of the river. In the foreground. The four men are on a rock formation in the foreground. One man, wearing a black shirt and suspenders, is standing with his hands behind his back. A second man is half sitting, half standing next to a small hill. Two other men are next to the site of the fossil. According to Charles H. Sternberg in his book "Hunting Dinosaurs on Red Deer River, Alberta, Canada" (page 64), this specimen was discovered by his son, Charles (Charlie) M. Sternberg.