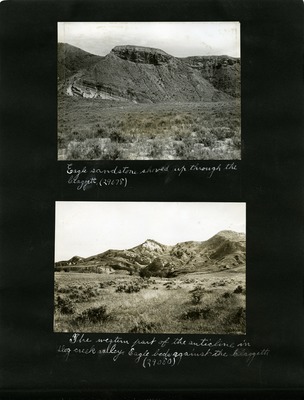 This page is from George Sternberg's personal photo album. These black-and-white photos were collected by paleontologist George Sternberg. The top photograph shows the Claggett shales in Alberta. At the bottom left of the middle Claggett, Eagle sandstone is poking up through the shale. The shale is dark and rocky. The stratified sandstone is much lighter and smoother. The bottom photo shows the anticline in Dog Creek Valley. In this anticline, the Eagle sandstone is visible coming up through the Claggett shales. The top of the middle outcropping is lined with many coniferous trees, and the foreground of the photo is covered in grass and sagebrush. Underneath each of these photos is an inscription written by Sternberg.

Eagle sandstone shoved up through the Claggett (29078). ; The western part of the anticline in Dog creek valley. Eagle beds against the Claggett. (29080).