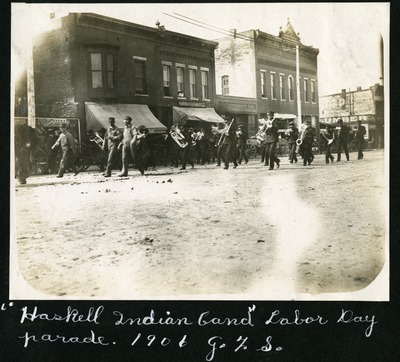 Haskell Institute Marching Band. A black and white photo of the Haskell Institute Marching Band as they march down the street in a Labor Day Parade in Lawrence, Kansas. They are led by three men wearing overalls. The members of the band are wearing band uniforms and hats. They are playing tubas, trombones, trumpets, clarinets, and a French horn. Several buildings of the Lawrence business district are in the background. One person is watching the parade from a second story window in one of the buildings.