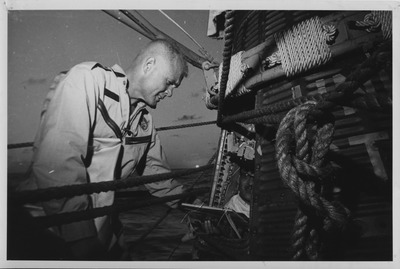 This black and white text is located on the backside of the next image (image 75). This description describes the image and context of the imagery.

National Aeronautics and Space Administration Washington 25, D.C. For Release February 20, 1962 NASA Photo No. 62-MA6-137 Cape Canaveral, Fla. - Astronaut John Glenn checks the Friendship 7 spacecraft after completing three orbits around the earth(sic), traveling at 17,500 M.P.H. The destroyer Noa picked up Glenn and spacecraft 21 minutes after land near Grand Turk Island. A capsule technician inside the spacecraft checks the interior for any damage.