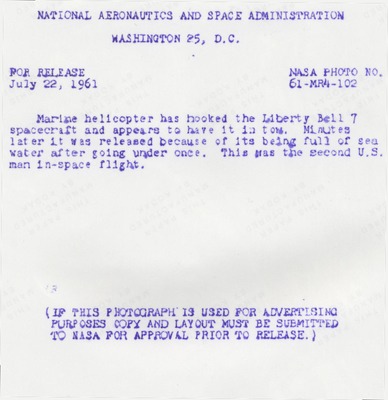 National Aeronautics and Space Administration Washington 25, D.C. For Release July 22, 1961 NASA Photo No. 61-MR4-102 Marine helicopter has hooked the Liberty Bell 7 spacecraft and appears to have it in tow. Minutes later it was released because of its(sic) being full of sea water after going under once. The was the second U.S. man in-space flight. (If This Photograph is Used for Advertising Purposes Copy and Layout Must Be Submitted to NASA for Approval Prior to Release.)