052 Back Side of Photograph Astronaut Alan B. Shepard Biography 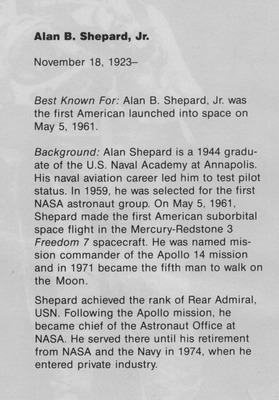 Alan B. Shepard, Jr. November 18, 1923 - Best Known For: Alan B. Shepard, Jr. was the first American launched into space on May 5, 1961. Background: Alan Shepard is a 1944 graduate of the U.S. Naval Academy at Annapolis. His naval aviation career led him to test pilot status. In 1959, he was selected for the first NASA astronaut group. On May 5, 1961, Shepard made the first American suborbital space flight in the Mercury-Redstone 3 Freedom 7 spacecraft. He was named mission commander of the Apollo 14 mission and in 1971 became the fifth man to walk on the Moon. Shepard achieved the rank of Rear Admiral USN. Following the Apollo mission, he became chief of the Astronaut Office of NASA. He served there until his retirement from NASA and the Navy in 1974, when he entered private industry.