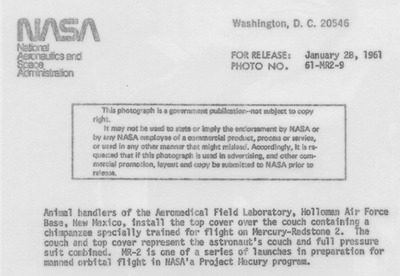 National Aeronautics and Space Administration Washington, D.C. 20546 For Release: January 28, 1961 Photo No. 61-MR2-9 This photograph is a government publication - not subject to copyright. It may not be used to state or imply the endorsement by NASA or by any NASA employee of a commercial product, process, or service, or used in any other manner that might mislead. Accordingly, it is requested that if this photograph is used in advertising, posters, books, etc. Layout and copy be submitted to NASA prior to release. Animal handlers of the Aeromedical Field Laboratory, Holloman Air Force Base, New Mexico, install the top cover over the couch containing a chimpanzee specially trained for flight on Mercury-Redstone 2. The couch and top cover represent the astronaut's couch and full pressure suit combined. MR-2 is one of a series of launches in preparation for manned orbital flight in NASA's Project Mercury program.