038 Back Side of Photograph Redstone Rocket 8-Image Sequence 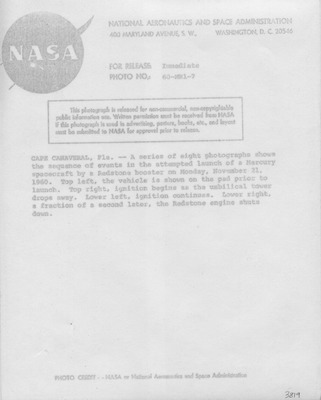 National Aeronautics and Space Administration 400 Maryland Avenue, S.W., Washington, D.C. 20546 For Release: Immediate Photo No. 60-MR1-7 This photograph is a government publication - not subject to copyright. It may not be used to state or imply the endorsement by NASA or by any NASA employee of a commercial product, process, or service, or used in any other manner that might mislead. Accordingly, it is requested that if this photograph is used in advertising, posters, books, etc. Layout and copy be submitted to NASA prior to release. Cape Canaveral, Fla. -- A series of eight photographs shows the sequence of events in the attempted launch of a Mercury spacecraft by a Redstone booster on Monday, November 21, 1960. Top left, the vehicle is shown on the pad prior to launch. Top right, ignition begins as the umbilical tower drops away. Lower left, ignition continues. Lower right, a fraction of a second later, the Redstone engine shuts down.