026 Human Centrifuge Surrounded by Portraits of the Mercury Astronauts 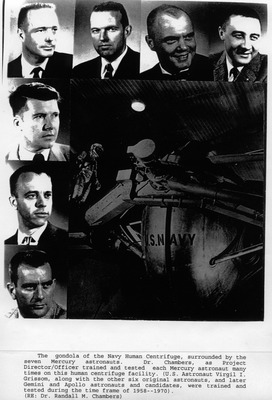 This black and white photograph is a collage of each of the seven astronauts portraits along the left and top side and the gondola on the bottom right. Printed text is below the photograph.

The gondola of the Navy Human Centrifuge, surrounded by the seven Mercury astronauts. Dr. Chambers, as Project Director/Officer trained and tested each Mercury astronaut many times on this human centrifuge facility. (U.S. Astronaut Virgil I. Grissom, along with the other six original astronauts , and later Gemini and Apollo astronauts and candidates, were trained and tested during the time frame of 1958-1970). (RE: Dr. Randall M. Chambers)