002 Back Side of Photograph Damaged Capsule 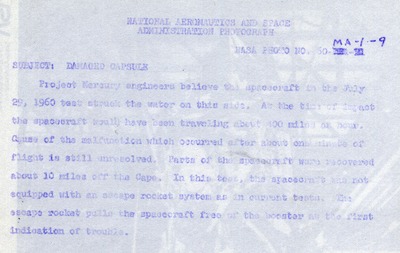 This black and white text is located on the backside of the prior image. The transcription describes the image and context of the imagery.

National Aeronautics and Space Administration Photograph NASA PHOTO NO. 60-MA-1-9 Subject: Damaged Capsule Project Mercury engineers believe the spacecraft in the July 29, 1960 test struck the water on this side. At the time of impact the spacecraft would have been traveling about 100 miles an hour. Cause of the malfunction which occurred after about one minute of flight is still unresolved. Parts of the spacecraft were recovered about 10 miles off the Cape. In this test, the spacecraft was not equipped with an escape rocket system as in current tests. The escape rocket pulls the spacecraft free of the booster at the first indication of trouble.