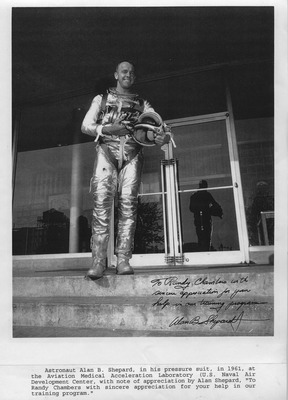 This black and white photograph is a signed photograph of astronaut Alan B. Shepard. Shepard is standing on stairs outside of a building and wearing a pressure suit. Printed text is at the bottom of the photograph.

Astronaut Alan B. Shepard, in his pressure suit, in 1961, at the Aviation Medical Acceleration Laboratory (U.S. Naval Air Development Center, with note of appreciation by Alan Shepard, "To Randy Chambers with sincere appreciation for your help in our training program."