151 Back Side of Photograph Marine Helicopter Rescues Astronaut Grissom 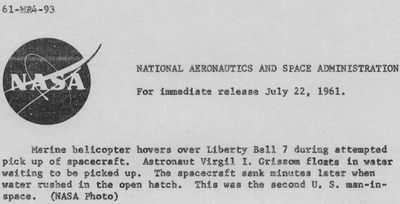 61-MR4-93 National Aeronautics and Space Administration For immediate release July 22, 1961. Marine helicopter hovers over Liberty Bell 7 during an attempted pick up of spacecraft. Astronaut Virgil I. Grissom floats in water waiting to be picked up. The spacecraft sank minutes later when water rushed in the open hatch. This was the second U.S. man-in-space. (NASA Photo)