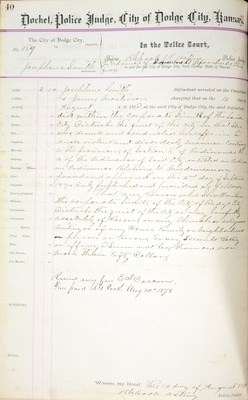 A page from the Dodge City police docket ledger detailing a court case against Josephine Smith for drunk and disorderly conduct.

Docket, Police Judge, City of Dodge City, Kansas. The City of Dodge City, Plaintiff, No. 389 vs. Josephine Smith, In the Police Court, Before R.G. Cook, Justice of the Peace, Police Judge in absence of Samuel Marshall, Police Judge, in and for the City of Dodge City, Ford County, State of Kansas. Fine, 2.00 Costs, Judge, Docket, .10 Number, .10, Title, .10, Complaint, .25. Warrant, .25. Subpoena, Swearing, Witness, Trial, .50, Judgement, .25, Entering Judgement, .25, Mittimus, Commitment, Continuance, Entries, .50. Filing Papers, .10 Index, .10. Fine and costs paid Aug 19, 1878 Attorney, 3.00. Received my fee. E.F. Colborn, Marshal. 2.00. Witnesses, Total. Fine paid R.G. Cook Aug 20, 1878 Josephine Smith, Defendant arrested on the complaint of James Masterson charging that on the 15th day of August AD. 1878, at the said City of Dodge City, the said Defendant did within the corporate limits of said city then and there disturb the quiet of the city in that she was drunk and conducted herself in a rude, violent, and disorderly manner. Contrary to the provisions of Section II of Ordinance No. 16 Relating to Misdemeanors paased and affirmed on the 2nd day of September 1876 and duly published and provided as follows: That any person who shall within the corporate limits of the City of Dodge City disturbs the quiet of the city in any lawfully assemblage of persons or any church or [illegible] meeting or of any house family or neighborhood or person or persons for any assault, battery, an offering of sum not less than one nor more than fifty dollars. Witness my hand: This 16 day of Aug, 1878, R.G. Cook, acting Police Judge.