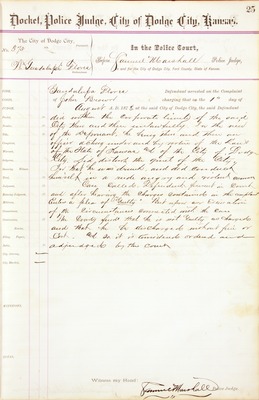 A page from the Dodge City police docket ledger detailing a court case against Guadalupa Flores for drunk and disorderly conduct.

Docket, Police Judge, City of Dodge City, Kansas. The City of Dodge City, Plaintiff, No. 375 vs. W. Guadalupa Flores, Defendant. In the Police Court, Before Samuel Marshall, Police Judge, in and for the City of Dodge City, Ford County, State of Kansas. Fine, Costs, Judge, Docket, .10 Number, .10, Title, .10, Complaint, .25. Warrant, .25. Subpoena, Swearing, Witness, Trial, .50, Judgement, .25, Entering Judgement, .25, Mittimus, Commitment, Continuance, Entries, .50. Filing Papers, .10 Index, .10. Attorney. Marshal. Witnesses, Total. Guadalupa Flores Defendant arrested on the complaint of John Brown charging that on the 1st day of August AD. 1878, at the said City of Dodge City, the said Defendant did within the corporate limits of the said City then and there unlawfully in the view of the deponent he being there and then an officer acting under and by virtue of the law of the State of Kansas and of the City of Dodge City did disturb the quiet of the city in that he was drunk and did conduct himself in a rude and angry and violent manner. Case called. Defendant present in court and after hearing the charges contained in the complaint read enters a plea of â€œguilty.â€ But upon an examination of the circumstances connected with the case the court finds that he is not guilty as charged and that he is discharged without fine or cost and so it is considered ordered and adjudicated by the court. Witness my hand: Samuel Marshall, Police Judge.