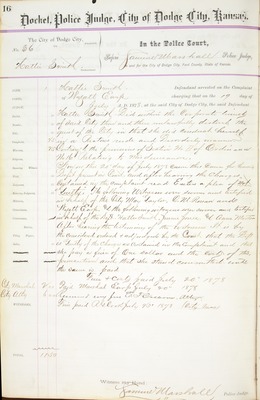 A page from the Dodge City police docket ledger detailing a court case against Hattie Smith for disorderly conduct.

Docket, Police Judge, City of Dodge City, Kansas. The City of Dodge City, Plaintiff, No. 366 vs. Hattie Smith, Defendant. In the Police Court, Before Samuel Marshall, Police Judge, in and for the City of Dodge City, Ford County, State of Kansas. Fine, 1.Costs, Judge, Docket, .10 Number, .10, Title, .10, Complaint, .25. Warrant, .25. Subpoena, Swearing, Witness, Trial, .50, Judgement, .25, Entering Judgement, .25, Mittimus, Commitment, Continuance, Entries, .50. Filing Papers, .10 Index, .10. Fine and costs paid July 20, 1878. City Attorney. 6.00 Received my fee E.F. Colburn, Atty. City Marshal. 2.00, Paid Marshal Earp July 20, 1878. Witnesses, Total. 11.50 Fine paid R.G. Cook July 25, 1878. Hattie Smith Defendant arrested on the complaint of Wyatt Earp charging that on the 19th day of July AD. 1878, at the said City of Dodge City, the said Defendant Hattie Smith did within the corporate limits of the said City then and there unlawfully disturb the quiet of the City in that she did conduct herself in a riotous, rude and violent manner. Contrary to the provisions of Section II of Ordinance No. 16 Relating to Misdemeanors. Now on this 20th day of July 1878 comes this cause for hearing. Case called. Defendant present in court and after hearing the charges contained in the complaint read enters a plea of â€œnot guilty.â€ The following witnesses were sworn and testified on behalf of the City, May Gaylor, C.M. Ronan and Wyatt Earp. And his following witnesses were sworn and testified in behalf of the defendant. Hattie Smith, Jennie Jones and Anna Morton. After hearing the testimony of the witnesses it is by the court considered ordered and adjudicated that the defendant is guilty of the charges and that she pay a fine of one dollar and the costs of this prosecution and that she stand committed until the said is paid. Witness my hand: Samuel Marshall, Police Judge.